Reconstruction of early colour film about the life of Thomas Talbot 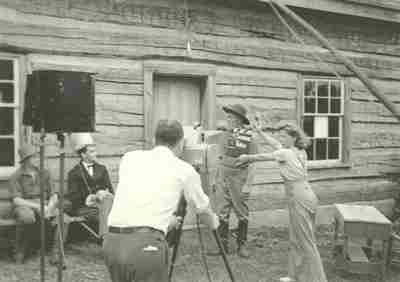 Still from the filming of "Talbot of Canada"

London’s first colour feature film was called Talbot of Canada. A life of Col. Thomas Talbot, it was shot on the shores of Lake Erie. Much of the original film, and all of the audio, was lost in a fire, but what remained was painstakingly reconstructed by Chris Doty and a team of voice artists. Doty wrote a charming account of both the film and its reconstruction.

There is a copy of Talbot of Canada available at the London Public Library.

This entry was posted on Friday, May 27th, 2011 at 6:43 pm and is filed under History, Talbot. You can follow any responses to this entry through the RSS 2.0 feed. You can leave a response, or trackback from your own site.