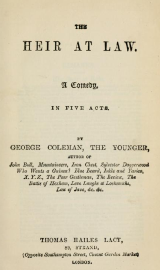 Title Page for George Colman the Younger's play, "The Heir At Law"

There is a rich selection of plays known to be have been mounted in London’s Theatre Royal in the 1830s and 1840s which could be re-performed. The following list is based on primary source research in Mark Tovey’s paper, “The First Stage: The Officers of the London Garrison and the Theatre Royal” (London and Middlesex Historian, vol. 20). The work for this paper included reading through extant newspapers from the period, scanning for theatre reviews, theatre advertisements, and other notices of the day. London Historian Dan Brock assisted in the preparation of the current list by tracking down the names of the playwrights.

Where available, links are provided below to biographies of the playwrights (on Wikipedia), and to the plays themselves (on archive.org). In some case, the full text of the play is not available, in which case we provide a link to the bibliographic information on Open Library. One of the goals of Garrison Theatricals is to find original editions of all play-texts of plays performed at the Theatre Royal (London, C.W.) which are not yet in archive.org. We are working to see that they are scanned and made available in archive.org, and thus to anyone interested in producing these plays in the future. If you are aware of any productions we have missed, or digital versions of any of the plays not linked below, please let us know below, and we would be pleased to update this list.